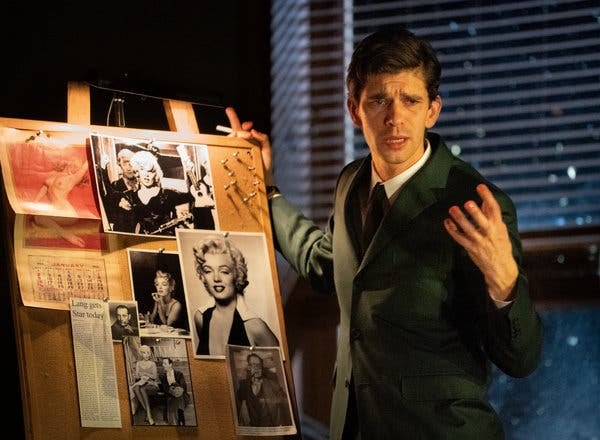 Marilyn Monroe is falling to pieces again. That most endlessly analyzed of Hollywood sex goddesses is now being subjected to an especially rigorous process of deconstruction — or is it evaporation? — at the Shed, the new, $475 million arts center of Hudson Yards, where Anne Carson’s “Norma Jeane Baker of Troy” opened on Tuesday night.

“Norma Jeane” — which is less a play than a staged poem — is the inaugural production at the 500-seat Griffin Theater, and it has cultural cachet to burn, with the added draw of pop appeal. Ms. Carson is the esteemed Canadian poet, classicist, professor and translator, known for playfully finding serious links between the ancient past and the evanescent present.

The director is Katie Mitchell, the intensely cerebral theater and opera director. And its sole performers — and this, for the less recondite theatergoer, is the beauty part — are that fine stage and screen actor Ben Whishaw and the opera star Renée Fleming.

Neither Mr. Whishaw nor Ms. Fleming portrays the title character in this equally hypnotic and exasperating production. Or not exactly. When first seen, on a snowy New Year’s Eve in the early 1960s, their characters appear to be a rather anxious businessman (Mr. Whishaw) and the thoroughly professional stenographer (Ms. Fleming) he has recruited to help him work, after hours, on a special project.

That would be the very script of the show we’re watching, which is indeed about Norma Jeane Baker. If you don’t know that Norma Jeane was Monroe’s birth name, I wish you much luck in following this show. Because that’s only the first — and by far the simplest — of the identities attached to Monroe in Ms. Carson’s investigation of the illusion and substance of feminine beauty in a testosterone-fueled world of war.

For Ms. Carson has merged Monroe with another much-maligned sex object, Helen of Troy. You know who she is, right, the face that launched a thousand ships? But wait. This Helen isn’t exactly the woman you learned about in school. Instead, she’s the heroine of Euripides’ seldom-performed tragedy “Helen.”

In that play, Helen never set foot in Troy, having been spirited away by the Gods (to exile in Egypt) before the war ever started. There was someone who appeared to be Helen living with her abductor, Paris. But she, it turns out, was only a phantasm or (to use a word much savored in Ms. Carson’s poem) a cloud.

That is the story that Mr. Whishaw’s character is trying to tell, more or less, except that in his rendering, Helen is Norma Jeane, while her ostensibly cuckolded husband, Menelaus is transformed into Arthur, King of Sparta and New York (referring to Monroe’s third husband, the playwright Arthur Miller). The movie director Fritz Lang figures in this version, as does Monroe’s confidant Truman Capote, and — oh, yes — the singer Pearl Bailey.

Norma Jeane is further conflated with another abductee from Greek mythology, Persephone, especially as she was conjured by the 20th-century British poet Stevie Smith. All these variations on the theme of beautiful women held captive by men echo a phrase that is both spoken and sung throughout this production: “It’s a disaster to be a girl.”

Now why, you may well ask, is this a tale to be told by a man? Ms. Carson has said that she wrote this monologue with Mr. Whishaw in mind. He had appeared most compellingly as a fluidly androgynous Dionysus in Ms. Carson’s translation of Euripides’ “Bakkhai,” at the Almeida Theater in London in 2015. 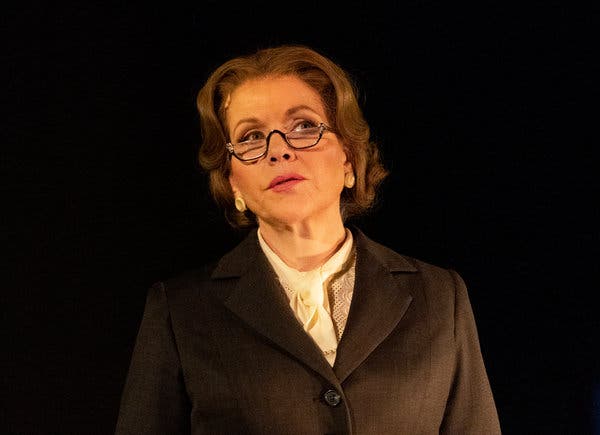 Renée Fleming as a stenographer in the production, which mixes spoken and sung monologues.CreditSara Krulwich/The New York Times

His ability to cross the gender divide without coyness or caricature turns out to be an invaluable asset in “Norma Jeane.” As his nameless man dictates his reworked version of Euripides — replete with spoken instructions as to punctuation and spacing, along with lengthy digressions on strategies of war — he slowly divests himself of his workaday clothing.

What’s revealed beneath his business suit is a deeply scarred torso, possibly — you may infer — a legacy of time in the military. Then, little by little, this nervous, determined man reinvents himself — painted by fingernail by painted fingernail, false eyelash by false eyelash — as Monroe as she was seen in “The Seven Year Itch.”

It is a process that at first appalls Ms. Fleming’s transcribing secretary. But as the production continues, she warms to her wounded employer’s ardent attempts to understand a woman whose suicide is still fresh in the American mind. By the end, they have together achieved a sort of improbable apotheosis of empathy.

Or that’s the way I saw it. Ms. Carson is not the most immediately accessible of writers. Nor is Ms. Mitchell — whose recent work includes the divisive, gender-swapping Martin Crimp play “When We Have Sufficiently Tortured Each Other” at London’s National Theater — one to lead her audiences by the hand.

She has rearranged Ms. Carson’s original text so that the play now begins with Mr. Whishaw uttering the ancient Greek word τις, which he explains is a highly protean pronoun. The monologue that follows is dense with references that range from the academic to the tabloid. And it is heard not only as spoken live by Mr. Whishaw, but as recited by his voice on a tape recorder.

His words are occasionally picked up and echoed, often in song, by Ms. Fleming. From time to time, her creamy, disembodied voice floats through the air like thought made sound.

You don’t really you need to know your classics or even your Hollywood lore to grasp the thematic gist of “Norma Jeane,” which ponders the follies of war-making men and their abuses of women. Sometimes Ms. Carson’s conjunctions of figures past and present can seem both too obvious and too obscure. The show’s surprisingly predictable conclusion lacks the haunting resonance it aspires to.

Mr. Whishaw and Ms. Fleming are, against the odds, marvelous. They somehow lend an emotional spontaneity to ritualistic words and gestures, while conjuring an affecting relationship between two people who, after all, don’t even exist in Ms. Carson’s text. Mr. Whishaw’s astutely measured metamorphosis here suggests both deep, contemporary personal neurosis and atavistic self-sacrifice.

As might be expected, Ms. Fleming brings a luxuriant, caressing tone to the song fragments composed by the composer Paul Clark (which sometimes bring to mind Samuel Barber’s “Knoxville: Summer of 1915”). What you may not realize is that most of the sound effects and background music have been made entirely from a base of recorded clusters of notes sung by Ms. Fleming.

This seems appropriate to a show about the mutability of perception and image. And though it’s a man who narrates — and tries to make sense of — Norma Jeane’s story, it is fittingly a woman’s voice that supplies the aural oxygen in which it unfolds.