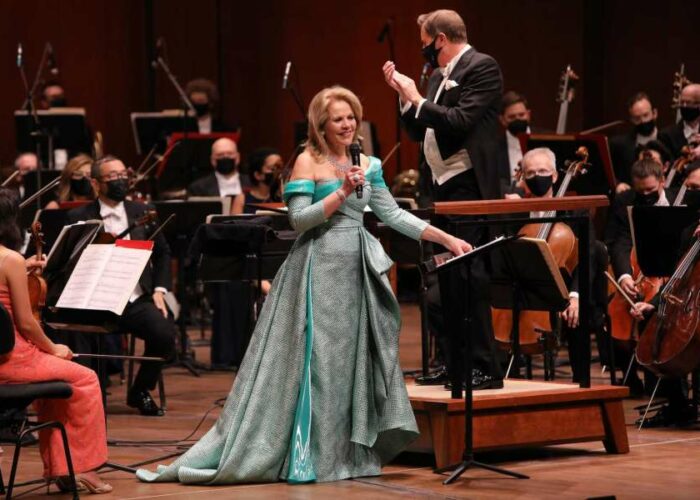 A proper gala definitely demands a diva, but Renèe Fleming is decidedly down to earth.

The superlative soprano returned Saturday to the scene of numerous career triumphs for the Houston Symphony’s Opening Night, a full-service to-do: black tie, red carpet, and enough diamonds on the guest of honor to make J-Lo jealous.

But Fleming was as far from haughty as Jones Hall is — geographically if not architecturally — from the Kennedy Center. Her approachable demeanor was only exceeded by her vocals, which practically wrapped the orchestra in a warm hug. On top of that goosebump-raising voice, Fleming has developed a keen sense of subtlety that permits her to display great emotional range without being overly showy about it.

Still, events of the previous year and a half couldn’t help but put something of a damper on the celebration. Saturday was one of Fleming’s first live performances on American shores since last March, and the symphony has only been back at full strength onstage since last weekend’s Pops season opener. Soloists, orchestras, and audiences alike are still feeling out that old familiar rhythm. Relief at being back keeps getting interrupted by reminders of what we’ve lost, how we’ve changed, and how far we’ve yet to go.

Indeed, the first piece Fleming sang was an a cappella setting by John Corigliano of Kitty O’Meara’s lockdown poem “And the People Stayed Home,” which she invested with deep compassion and a little humor. Noting afterward how the poem had gone viral in the pandemic’s early days, Fleming quipped, “I think we might change that word.”

COVID wasn’t the only factor weighing on the evening, though. Led by principal Pops conductor Steven Reineke, the orchestra warmed Fleming’s luminous vocals during George Frideric Handel’s “Dank sei dir, Herr,” a hymn of gratitude she dedicated to those killed in the September 11 attacks. Two dreamlike songs by French composer Reynaldo Hahn deepened her spell.

Reineke and the orchestra spelled Fleming from time to time with some well-chosen selections of their own. First came a richly orchestrated suite from Aaron Copland’s “The Tender Land” — which Reineke noted was her first opera as a student at SUNY Potsdam — which let the orchestra flex a variety of colors, from jovial and optimistic to pensive and bittersweet. Brace yourselves for Beethoven’s Fifth next weekend.

Fleming returned to sing two lesser-known Italian opera gems: Leoncavallo’s “Musette svaria sulla bocca viva,” from “La Boheme,” glittered like a Schonbek chandelier; while Cilea’s “Io son l’umile ancella” dropped into a lower register to scrutinize serving the muse. The latter title translates as “I am the humble servant of the creative spirit”; Fleming introduced it with a funny story about poisoned flowers and dueling divas.

That phrase neatly sums up Fleming too, of course. Her own creative spirit extends to musical theater, including a Tony nomination for the 2018 Broadway revival of Rodgers and Hammerstein’s “Carousel.” Following the orchestra’s gala-worthy waltz from that 1945 musical, Fleming returned for a melancholy Kander and Ebb medley of “Winter” and “Love and Love Alone,” from “The Visit.” “Hello, Young Lovers,” from the “The King and I,” blended seasoned empathy with wistful nostalgia for days gone by.

Fleming closed the concert with another bespoke original, Andrew Lippa’s “The Diva,” which used sly humor and a steady rock beat to make the case that world-famous divas are in fact regular folks like the rest of us. Improbable, perhaps, but Fleming was so self-deprecating and warm-hearted she really sold it.

Of course she did an encore, as any good diva should, and chose the harp-kissed “O mio babbino caro,” one of Puccini’s most popular arias and a character study in lovelorn anguish. Fleming made it one of those close-your-eyes moments, sorrowful and sublime, where the world melted away as her voice opened as wide as the Grand Canyon. Season underway, symphony honed, multiple ovations earned.

Chris Gray is a Galveston-based writer.